Fitch Ratings revised its outlook for the operating environment for the Egyptian banking sector to stable in August, from negative in July, due to improved liquidity in foreign currencies.

In addition, the revised outlook for Egypt reflects a healthy outlook for the country’s economic growth, Fitch said..

He added that loan growth registered 6% in the first quarter of 2021 after a sharp increase of 31% in 2020, driven by the initiatives of the Egyptian authorities to support lending to small and medium enterprises and certain sectors at low rates. subsidized interest.

In this regard, Fitch expects weak double-digit loan growth for Egypt in 2021, accelerating in 2022 thanks to low interest rates, a resumption of economic growth and higher foreign investment. .

Fitch said the Egyptian banking system had net foreign assets of $ 1.7 billion at the end of June 2021; a marked improvement over the net external liabilities of $ 5.3 billion that it had accumulated at the end of April 2020, when foreign investors sold their holdings of government securities in local currency at the start of the pandemic, causing portfolio outflows of $ 17 billion.

He added that the pressures on Egyptian banks’ credit profiles and sustainability ratings eased after improvements were made to the operating environment by the end of the third quarter of 2020.

Regarding Egypt’s foreign exchange liquidity, Fitch said it rose to $ 29 billion at the end of May 2021, compared to $ 10 billion recorded at the end of June 2020.

He also noted that the government issued $ 4.55 billion in Eurobonds between September 2020 and February 2021.

Fitch attributed this to higher external liabilities, as banks increased their borrowing from international development finance institutions to support their foreign exchange liquidity.

This poses some repayment risks, as the debt-servicing capabilities of banks are likely to come under renewed pressure from a new wave of massive sales by foreign investors.

On the positive side, the quality of banks’ assets has held up despite the pandemic’s severe impact on the trade, textiles and tourism sectors, according to Fitch.

“The deterioration in loan quality following the expiration of the six-month credit moratorium in September 2020 has been largely contained. The industry’s Phase 3 loan ratio was stable at 3.4% at the end of Q3 2020, although the Phase 2 loan ratio varied widely between banks, ranging from 2% to over 30%. ”Fitch explained. 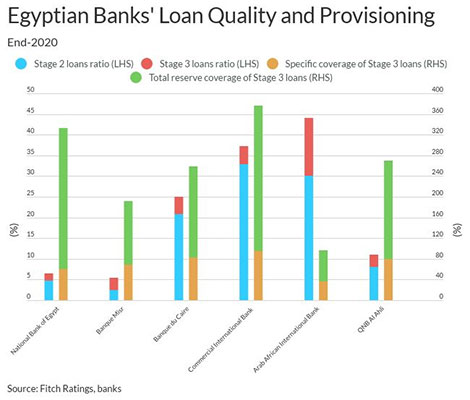